THE 7.2 MILLION QAR RIMAC NEVERA – COMPACT HYPERCAR WITH AN AGGRESSION

After three years of previewing the C_Two concept, Rimac has finally revealed a production version called The Nevera. The Nevera is a fully electric car with over 1900 horsepower. It can run to 60 mph from a standstill in just 1.85 seconds! It comes with a 342-mile WLTP range and even supports fast charging at speeds up to 500 kW. Rimac will only make 150 models of Nevera and has a label price of 2 million euros (about 9 million QAR). Are you ready to invest your money in this Croatian product?

How Is The Rimac Nevera Looks From The Outside? 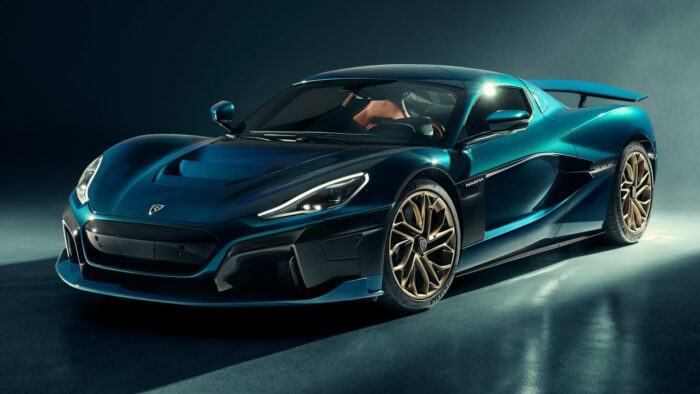 Rimac introduced the Nevera as a C_Two concept at the 2018 Geneva Motor Show. Since then, the supercar has undergone several changes, and the production specification model is entirely different from the prototypes.

The Nevera looks beautiful on the outside. Dipped headlights, butterfly doors, and bare carbon fiber elements make the Nevera look hot. It rides on polished, lightweight alloy wheels with a unique aerodynamic design to direct air to the brakes.

Diffusers, dividers, and radiators are designed to direct more airflow. Please note that the car runs on 1914 hp and has a massive battery. Therefore, it needs as much cooling as possible. The supercar comes with a “low resistance” mode that reduces the drag coefficient to 0.30. You can switch to “High Downforce” to increase downforce by 325%.

How Is The Rimac Nevera Looks From The Inside? 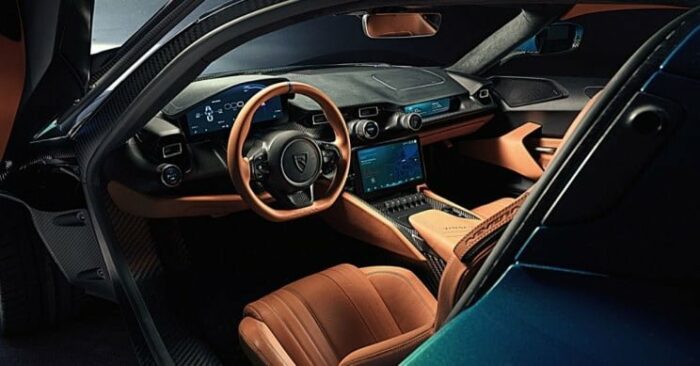 The interior is very luxurious and luxurious. The two-seat car comes with upholstery that pairs well with carbon fiber hubs throughout. The car has three screens: one behind the flat steering wheel, one in the center console, and one in front of the passenger.

The Rimac Nevera will be offered in three factory models: GT, Signature, and Timeless. But, as with any luxury automaker, it allows you to go in a supercar according to your tastes and preferences.

How Much Power Does The Rimac Nevera Create?

Named after the Mediterranean storm, Nevera is the appropriately named supercar. It comes with a four-engine configuration that generates 1914 horsepower and 1,741 pounds of torque combined. Both the front and rear wheels are connected by a pair of single-speed gearboxes. It also features torque vectoring on all wheels.

Braking tasks are performed by 15.4-inch carbon-ceramic Brembo discs with six-piston calipers. The Croatian automaker noted that electric motors are entirely maintenance-free throughout their service life. Nevera also comes in seven different riding modes, including Drift mode to take advantage of all that torque:

How Much Does The Rimac Nevera Cost?

Rimac will manufacture only 150 models of Nevera, and each one is priced at 2 million euros. That’s roughly 9 million QAR based on exchange rates at the time of this writing. Since the automaker will offer custom customization options, expect it to cross the 13 million QAR price point in no time. Rimac hasn’t announced when the car will arrive, but reservations have been open for a long time. There were rumors that the car had been sold, but the automaker clarified that only the first year’s supplies had been sold at this time.

This website uses cookies to improve your experience while you navigate through the website. Out of these, the cookies that are categorized as necessary are stored on your browser as they are essential for the working of basic functionalities of the website. We also use third-party cookies that help us analyze and understand how you use this website. These cookies will be stored in your browser only with your consent. You also have the option to opt-out of these cookies. But opting out of some of these cookies may affect your browsing experience.
Necessary Always Enabled

Performance cookies are used to understand and analyze the key performance indexes of the website which helps in delivering a better user experience for the visitors.

Analytical cookies are used to understand how visitors interact with the website. These cookies help provide information on metrics the number of visitors, bounce rate, traffic source, etc.

Advertisement cookies are used to provide visitors with relevant ads and marketing campaigns. These cookies track visitors across websites and collect information to provide customized ads.

Other uncategorized cookies are those that are being analyzed and have not been classified into a category as yet.